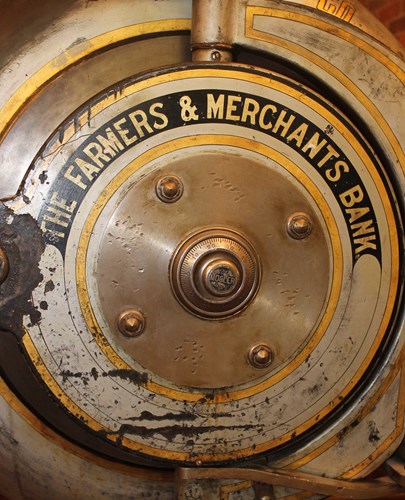 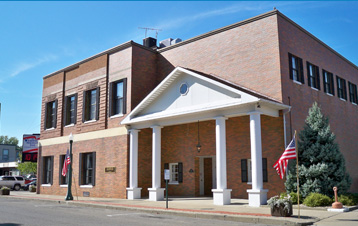 It's not every day that a bank celebrates their one hundredth anniversary and for a small town community bank; it's even a greater achievement. In 2012, The Farmers and Merchants Bank proudly proclaimed their 100th Anniversary. Like many businesses, the banking industry has experienced a lot of changes, especially regulatory and technological. The Farmers and Merchants Bank has taken great pride in embracing and adhering to the regulatory and technological changes.

In 1976, The Farmers and Merchants hired a programming company to write computer programs specifically for their operations. The bank maintained these programs and their own computer system by processing everything in house. Due to the compliance demands of the increased number of bank regulatory changes, the bank found it necessary to purchase bank computer software in 1996. They continue to process the entire banking operation in house to this day.

The entire banking operation means that every decision and every aspect of banking of The Farmers and Merchants Bank is completed in the same building that they started. How unique and priceless is that. From opening accounts, debit and ATM card applications, processing deposits, mailing statements, making loans, collecting payments, internet banking, mobile banking and everything else that goes into banking are done at 430 North Street, Caldwell, Ohio.

The following material is re-printed with permission from The Caldwell Journal-Leader. It first appeared in the February 23, 1938 edition of "The Journal", Volume 80, Number 31.

Birth Of The Farmers And Merchants Bank

On November 15th, 1911, a group of men consisting of W.D. Merry, R.E. Merry, E.W. Wickham, F.D. Combs and M.B. Archer, met in the Archer and Keenan law offices for the purpose of forming a corporation to be known as "The Farmers and Merchants Bank". Articles of incorporation were drawn and on the same day filed with the Clerk of Courts of Noble County, Ohio, Mr. James McAuley. On November 25th, 1911 these articles were duly filed with the Secretary of State, Mr. Charles H. Graves at Columbus, Ohio. Then on November 28th, 1911, a book of subscription to the Capital stock of The Farmers and Merchants Bank was opened and within a short period of days the three hundred shares of stock were fully subscribed.

On December 7th, 1911, at 10 o'clock a.m. the first stockholder's meeting was held in the law offices of Archer and Keenan, for the purpose of electing a Board of Directors. E.O. Keller was chosen to act as the chairman of the meeting and S.G. Brown was chosen to act as secretary. The Board of Directors chosen by the stockholders to serve until the second Wednesday of January, 1912, were as follows:

Following the meeting of the stockholders, the newly elected Board of Directors met to organize. Their organization was as follows:

Thus was the organization perfected. M.B. Archer became the first President of the new Bank and W.D. Merry the first Cashier. The by-laws of the corporation designated the second Wednesday of January of each year as the date of the annual stockholders meeting. On January 10th, 1912, the stockholders again met in the offices of Archer and Keenan at which time the same Board of Directors were re-elected, and at the meeting of the directors, the same officers were re-elected to serve for the year of 1912.

It is of interest to note that the notice of the 1912 stockholders meeting was printed as required by law in "The Noble County Republican Journal" and the proof of the publication is sworn by P.P. Hesson and acknowledged by W.A. McElfresh as a notary public.

On January 20th, 1912, F.E. Baxter, Superintendent of Banks in the State of Ohio, issued his certificate of authority granting full banking powers to the corporation. The new Bank was now duly authorized and formed. On January 25th, 1912, a lease for the present banking rooms was signed by the officers and J.S. Jones and L.C. Harper, the owners of the building.

The Bank fixtures were installed in the same room that the Bank now occupies and in March, 1912, the books and records were opened for business.

For over 100 years, The Farmers and Merchants Bank has been serving the community. We would like to serve you, too. We’ve made switching to FMB as simple and convenient as possible.

We are changing our Web Address to www.thefarmersandmerchants.bank Starting March 1st, 2018

Effective Thursday March 1st, 2018, you will be automatically redirected to our new web page (https://www.thefarmersandmerchants.bank). Please make sure to update your bookmarks to reflect our new web address. We at The Farmers & Merchants Bank are committed to ensuring our customers’ information is safe and secure. The requirements for a .bank domain are restricted and only available to verified banks. A .bank domain is a trusted, verified, more secure and easily identifiable location on the Internet for the global banking community and the customers it serves.

This change will not affect any of your logins or account information. Your online and mobile banking logins will remain the same.